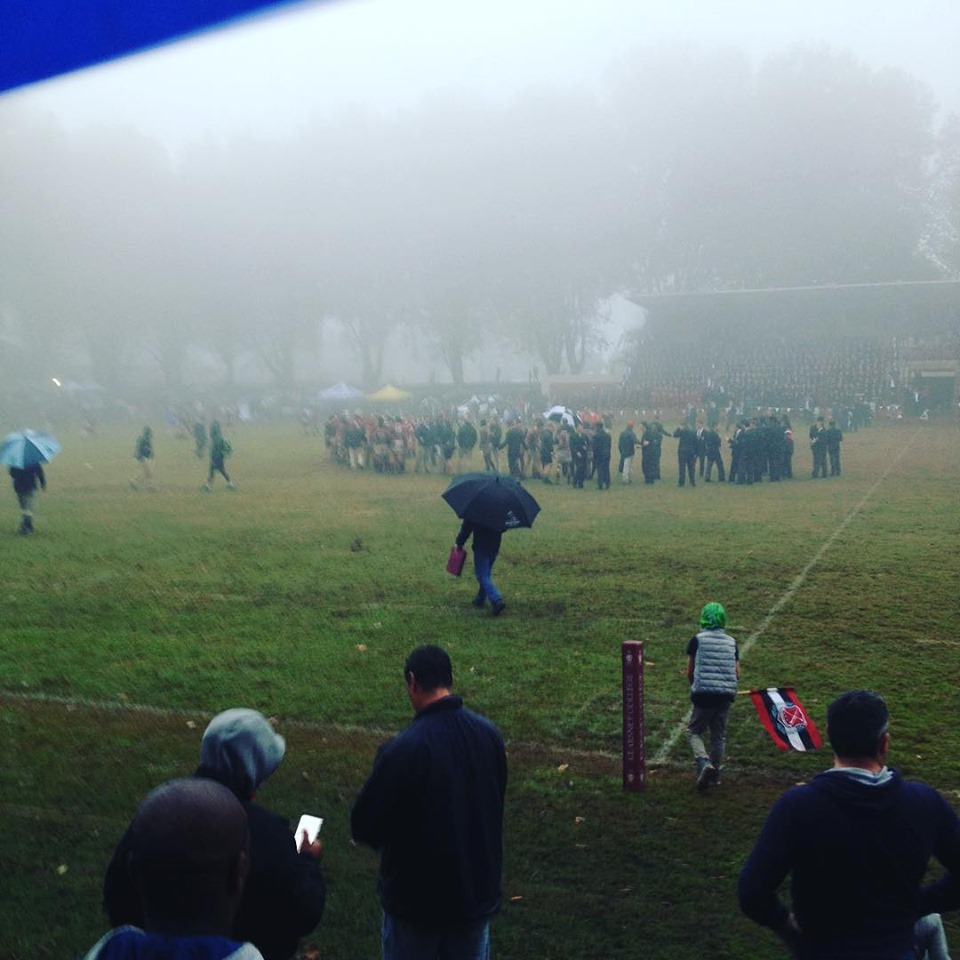 Maritzburg College took 69-and-a-half minutes to take the lead on Saturday in an epic encounter with Kearsney College on Stott field.

With the mist and drizzle coming in waves it was weather best suited for a warm fire, a good book and a liberal supply of Gluhwein. But there we all were, riveted to our seats as we watched the spectacle unfold in front of us.

Like heavyweight boxing contests of old, this contest went the distance with neither team giving an inch. That there was a winner and a loser is secondary to the spectacle, as Kearsney and College laid into each other with a single-minded ferocity of purpose.

To experience is everything.

Kearsney started like a house on fire as their forwards ploughed into the College defensive lines. With the hosts’ pressure soon telling, Maritzburg were caught offsides in the midfield and the referee awarded a penalty.

In a sign of intent, Kearsney elected for the lineout option. The resultant maul was sacked illegally and Kearsney again turned down the 3 points to go for 5.

In a mis-timing the throw missed its man, something which happened fairly often to both hookers during through the course of the afternoon. The ball sailed over the lineout, only to be bravely snapped up by Matthew Hind as the Maritzburg defenders descended on him.

The ball was moved to the left of the uprights as the Kearsney pack pounded on the line. In a smart move the Kearsney backline – seeing space on the right – wrapped around and Maritzburg were a bit slow to react.

The ball was quickly passed and fell into the hands of burly fullback Derick Marshall, who crashed over in what was the 4th minute of the match. The conversion was missed but Kearsney (5-0) had every right to feel good about their solid start. 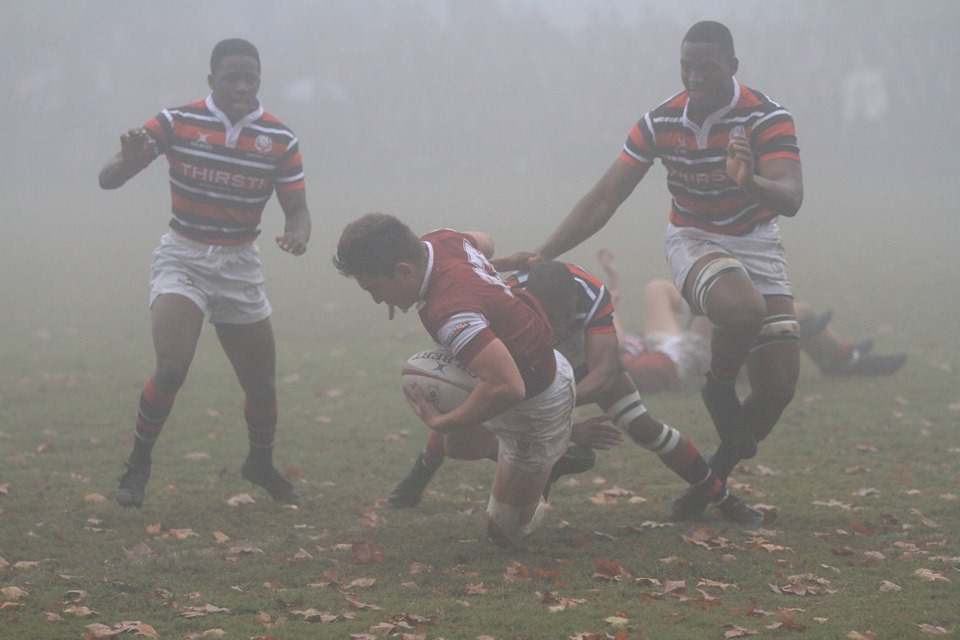 That would be the last bit of scoring for the next 40 minutes as the sides battled for territory in the slippery conditions.

Fullback Marshall, often standing at first receiver, would drive Maritzburg back with his siege-gun boot. Even though he was kicking into a slight breeze, Marshall was steering Kearsney into comfortable areas of the field.

Looking after your eyesight requires a consult with the experts. Make an appointment. http://www.hilliarandgray.co.za/contact/

Maritzburg had opportunities to set up driving mauls in the Kearsney 22, only for Tyson Andrew or Aaron Smith to make telling steals in the lineout. When Maritzburg would hit their man, they would invariably make many metres with their rolling maul.

The anticipated match-up between Connor de Bruyn of Kearsney and Philani Simamane of Maritzburg started off on a crashing note.

A scrum to College deep in the Kearsney 22 saw the boys in Red Black and White run a backline move. On the ensuing play, Simamane was hit hard in a crunching tackle as he received man and ball. That he got up after such a brutal hit is a testament to his bravery but also that Wilson and De Bruyn had clearly laid down a marker… there would be nothing easy on this day.

Marshall contributed in most of the telling plays and it was after one of his barnstorming runs that College were penalised for being offside. Carmody elected to kick for the posts from the Maritzburg 10-metre line, but the shot at goal didn’t yield points.

In a play that epitomised what this Maritzburg team is all about, they fielded the kick and set off on a counter-attack.

Maritzburg, believing they had spotted  a smidgeon of space on Kearsney’s right flank, set off and in trying a tricky offload knocked the ball on – handing Kearsney the best field position since the opening minutes of the match.

Scrum to Kearsney 5 metres from the Maritzburg line, and from that scrum Kearsney spun the ball wide, only to be stopped by some resolute defence.

Maritzburg stole the ball and Simemane, seeing a bit of space, set off from his own goal. He darted and weaved all the way to the Kearsney 22-metre line and in the ensuing ruck Carmody suffered a shoulder injury. The big front-ranker bravely shrugged it off but was still quite clearly in pain.

In the resulting scrum a penalty was awarded to Maritzburg – which was a consequence of Kearsney collapsing the scrum.

Defence is the best form of attack. KZN’s Titan Technologies. Here for you. https://www.titantech.co.za/

With time running out, Maritzburg captain Kekana opted to kick for posts. The kick was missed and Kearsney purposefully worked a good angle for Marshall, whose boot had been the differentiator up to this point.

But in the tough conditions the attempted touch-kick slices off his boot, going directly out and giving Maritzburg a lineout deep inside Kearsneys 22 with just 1 minute left in this gripping first half.

Maritzburg were desperate to get something before the halftime whistle and Nzimande – seeing Kearsney lying a little flat – tried to put a little chip-kick in the air for centre Kekana to go after.

However, the greasy ball agonisingly slipped from his hands as he crashed over the tryline under a pile of Kearsney bodies. With that, the ref blews his whistle with the score being 5-0 to Kearsney at the changeover.

The conditions had not been conducive to running rugby.

In time-honoured KZN10 schoolboy tradition, both sides tried to play attractive, running rugby – and this is what makes schoolboy rugby so special – but the conditions made handling of the ball a lottery.

The second half started with Kearsney electing to kick for territory. A Maritzburg error led to a penalty being awarded to Kearsney right in front in the poles.

The option chosen was to go for a lineout but the execution was found wanting and Maritzburg benefited from a scrum feed inside their 22.

Kearsney, realising that they had let a golden opportunity get away, put on a huge shove and earned a tight-head for their efforts. Maritzburg, out of defensive alignment, left space on the outside and De Bruyn broke free from a tackle to score.

Carmichael made no mistake with the conversion and the score read a handy 12-0 to Kearsney with what remained a daunting 25 minutes still to play. 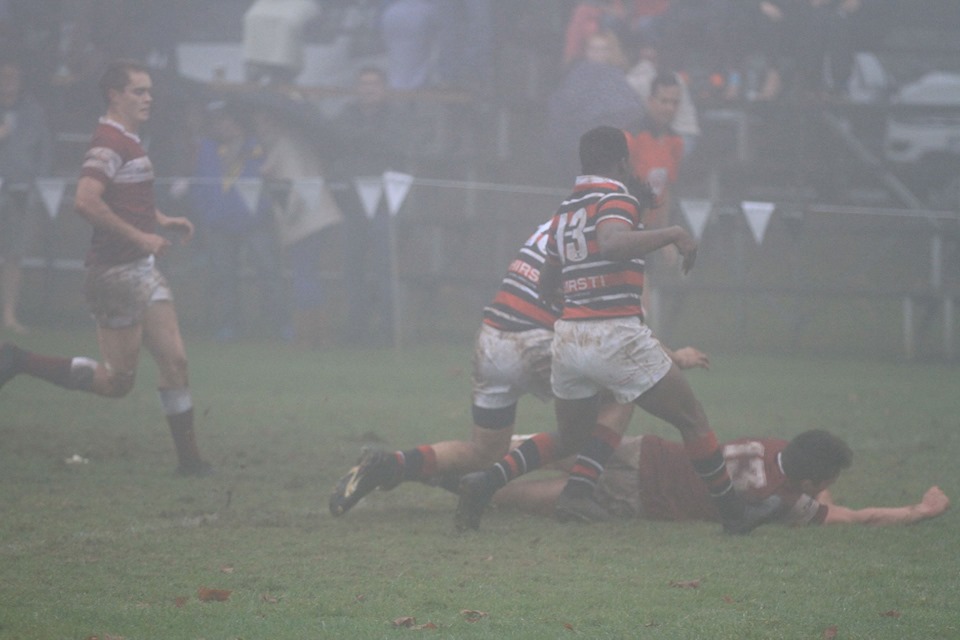 We will never know what was said under the College poles as Kekana spoke to his men, but whatever it was it did the trick, as straight from the kick-off College were immediately on the attack.

After a number of pick-and-goes, Maritzburg tighthead prop Matsheke went over under the poles; Trodd converted to make the score 12-7 still in the home side’s favour with 22 minutes to play.

It was now a completely different match – and the play during the last 20 minutes was breathtaking, as the action moved up and down Stott Field; Maritzburg and Kearsney taking turns in throwing haymakers at each other in seeing who could land the decisive blow.

First Maritzburg would make inroads and then Kearsney; and back and forth we went – But 5 minutes from time the territory battle seemed to go Maritzburg’s way.

Clear communication lines can make it or break it. https://www.cellc.co.za/ The Power is in Your Hands.

From a scrum on their 10-metre Marshall cleared with another of his booming kicks, and despite the conditions the ball just rolled and rolled and agonisingly for Kearsney it went over the Maritzburg deadball line.

Play was brought back all the way to the Kearsney 10-metre line with a Maritzburg feed at the scrum.

The Maritzburg and Kearsney supporters were now starting to get off their feet, it was edgy, heart-in-the-throat stuff as the anticipation built.

As is custom, Maritzburg College scumhalf Trodd made the feed and picked up from the of base of the scrum before darting down the blind side – making great metres before an errant pass handed possession back to Kearsney.

4 minutes left… and Maritzburg again had the ball in Kearsney territory, but a knock-on ensued… Could this be the breathing space the Kearsney first XV needed to get out of their half and stay in front until whistle-end of this see-saw encounter?

3 minutes left… and a solid scrum from Kearsney gave Marshall ample time to do just that. The lad with the booming boot made a solid connection with the ball but it was tough to watch as this vital and valuable cog in the Kearsney College offence and defence was forced to look on anxiously as the ball flew directly out into touch on the halfway line.

Septic tank & sludge pit drainage? Why let the conditions drain you? John Smithers has got your back. johnsmithers@vodamail.com.

The ref called play back, as the ball had been passed back into the 22-metre; heartbreak for for the fine player that is Marshall and this spirited Kearsney first XV.

The Maritzburg College eight rumbled up in effective fashion towards the Kearsney tryline but the efficient maul was by the bravest defence.

It now becomes a contest of sheer will as every centimetre gained or lost could be seen as a minor victory on the journey to victory or defeat.

What followed was wave after wave of Maritzburg College attacks and… finally… the Kearsney wall breaks… and it’s diminutive flanker Dlangalala who sneaks in next to the ruck to score.

The scores were now 12-12 with the conversion kick to come.

With 1 minute left, up steps the trusty Trodd, who lines up the kick of about 30 metres on the angle and puts the shot at goal straight down the middle – Game over and 14-12 to Maritzburg College as the ref blows the final whistle.

What a match… and credit must go to both teams for the spirit in which this gripping contest was played. It  was tough, uncompromising and honest – a great advert for all that’s good about schoolboy sport.

The heartiest of “well done(s)” to both Kearsney and Maritzburg College.

Next up on the KZN10.com winter sports menu are two intriguing match-ups where the quartet of teams have contrasting points to prove – rediscover the winner’s enclosure or maintain the momentum from Super Saturday 4 May.

Kearsney will be facing the resurgent force that is Michaelhouse away, whilst Maritzburg College host long-time friendly foes DHS.