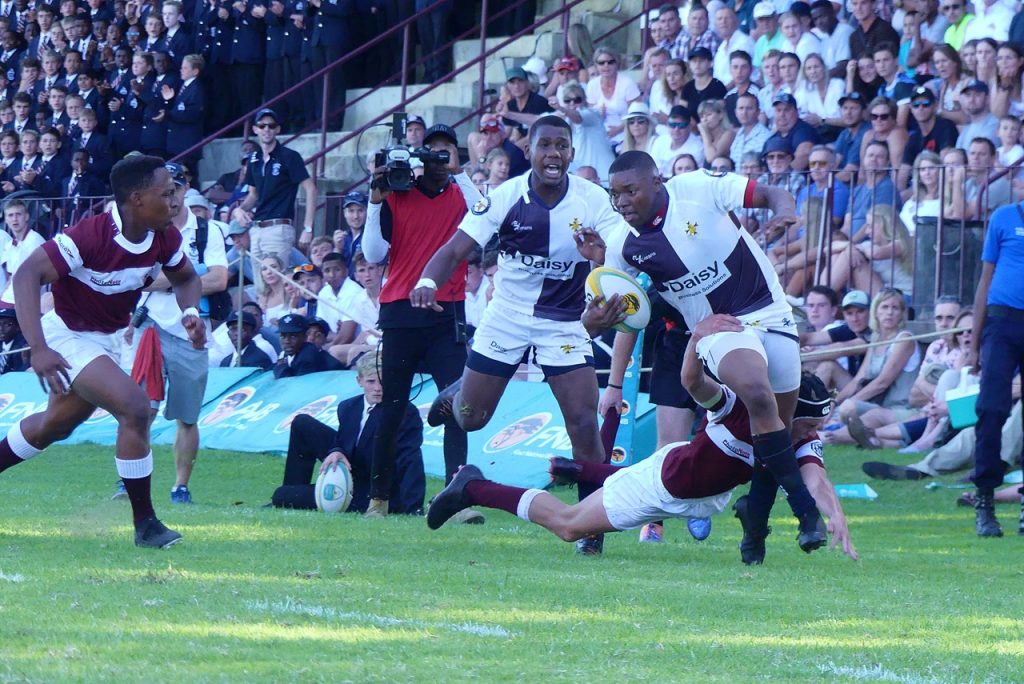 Coaches don’t expect perfection in a season opener, but there are other things they hope to see, like character and fight, and by that measure both Northwood coach Grant Bashford and Kearsney coach Nico Breedt will be satisfied with the effort of their charges in a pulsating 24-24 draw on Stott Field at Kearsney on Saturday, writes KZN10.com’s Brad Morgan.

Fortunes and momentum ebbed and flowed in the contest and, ultimately, there was nothing to separate the two sides on the scoreboard, not even at half-time when they turned level at 12-12. Both teams notched two tries and a single conversion in each half.

Northwood, after a memorable 20-12 victory over Kearsney at home last year, their first win over their Botha’s Hill opponents since 1996, wanted a good follow-up to that performance, but just three members of the side that claimed a sweet win in 2019 are left in this year’s line-up. That didn’t hinder them at all in the early going, though, as they took charge from the first scrum when they turned up the torque and powered over the Kearsney pack to earn a penalty, much to the delight of the travelling supporters.

The Knights were dominating up front and scrumhalf Prolight Shoba was doing a wonderful job in providing a quality, quick service from the rucks, which helped Northwood build up impressive momentum. They were soon rewarded with the opening try when Onyekachi John-Osunkwo powered his way over in the right corner. Luke Dudley put in a desperate smothering tackle, but momentum carried the Northwood centre across the try-line. The visitors then more than doubled their lead with a well-worked try, which was, again, rounded off by centre John-Osunkwo. Deep inside the Kearsney half, he profited from running a good line off the shoulder of his flyhalf, Emmanuel Bhiya, to receive a short pass, which pierced the home side’s defensive line and put him in under the posts.

At 0-12 down, it looked as if it might become a long afternoon for Kearsney, but the home team then showed character and resolve to lift their game and put Northwood on the back foot. Kearsney forced a shot at goal from a penalty, but it missed the mark. However, they didn’t have to wait much longer to get on the scoreboard through their centre Dudley, which drew a massive roar from the home side’s supporters.

Four minutes from the break and suddenly Kearsney had drawn level. From a five-metre lineout, they mauled effectively towards the Northwood try-line, splintering the visitors’ defences, before loosehead prop Cameron van Eck crashed over for the five-pointer. Kearsney forced their way over with a drive from a five-metre lineout to level the scores.

A gutsy, determined stand on their own try-line then stopped Northwood from edging in front once more, just before the half-time whistle.

After the break, Kearsney piled on the pressure and were almost over, but flyhalf Bhiya and towering lock Christopher Viviers combined to hold up the ball-carrier over the line.

The momentum was with the home team, but the pendulum swung when the Knights, who had been under sustained pressure, engineered a thrusting break down the left-wing from a turnover, with fullback Unathi Mayekiso diving over in the corner to put his side ahead once more at 17-12. Get a firmer grip on your possessions with KZN’s Titan Technologies. https://www.titantech.co.za/

Kearsney, again, turned up the heat and their captain Massimo Fierro was brought down only centimetres shy of the line after a powerful thrust. Stopped there, they quickly shifted the ball from left to right to put fullback Trent Coetzee into plenty of space and he sprinted over for a third five-pointer for the men in maroon. Centre Luke Dudley makes a break in the second half.

Kearsney’s fourth try, when it came, mixed simplicity with individual brilliance. From a set piece, flyhalf Matthew Hind, attacked the line before flipping a short ball to right wing Ayabonga Mngaza, who was flying up on his inside shoulder. Mngaza then did the rest, his mazy run cutting one way then the other, leaving the Northwood defenders grasping at air as he scythed his way through from 40 metres out to score a stunning try underneath the uprights. The simple conversion put Kearsney 24-17 up. Winger Ayabonga Mngaza proved a handful for the Northwood defence with his pace and evasive running.

With time running out, Northwood surged onto the attack, but Kearsney’s defence was resolute: Northwood bashed the ball up and Kearsney repulsed them with some stiff tackling.

Then, with only three minutes remaining on the clock, fullback Mayekiso received a pass on the Kearsney 22. Pumping his big thighs hard, he brushed aside two tacklers, forcing his way through a half-gap before breaking clear to fly over and dot down under the uprights. A simple conversion levelled the game at 24-24. The home team tried manfully for the winning points, carrying the ball through a number of phases, but Northwood gave little away to keep Kearsney out of scoring range and when the final whistle sounded a draw was probably a fair result.

“If you’re unemotional about it, it was entertaining. It was back and forth and it could have gone either way,” commented 1st XV coach Grant Bashford afterwards.

“From the start we had, we’re disappointed to draw, but being down then coming back to draw, we showed a lot of character. All in all, there are some mixed feelings.” Kearsney coach Nico Breedt, summed the up the clash as “a typical first game of the season. Both sides would have wanted fewer mistakes. I thought they were better than us in the set phases.

“From a Kearsney point of view, we would like to work on that. They put us under a lot of pressure during the set phases. We couldn’t exit our own half with the kicking game, which was quite poor.”

Referencing Northwood’s hot start, Breedt added: “We’ve got a good record at home and we weren’t panicking at 12-0 down, and I thought at one stage we were going to get some momentum after we made it 12-12. Unfortunately, instead of converting that pressure into more points, we let them back into the game.” A strong showing from the Northwood forwards ensured quality ball for the Knights’ backline.

The performance of the Northwood pack at scrum time pleased Bashford: “They were under pressure, they couldn’t get off of the base of the scrum. [Eighthman] Massimo Fierro and [centre] Connor de Bruyn were their two big carriers, Fierro off the base and Connor running shorter. They never really got that going today and that was from the pressure that was exerted in the scrum. We did enough in our scrum to unsettle them at the base and deny them the momentum that they were looking for from Fierro and De Bruyn.”

For Breedt, the big plus was the character his charges showed when under pressure: “At times our defense was really strong and I was happy with that, because it is the first time that we have been tested, with this being the first game of the season.”

Of concern for Kearsney will be the health of their captain Massimo Fierro, who was seen walking around after the game with an ice pack on his left shoulder, which was also in a sling. His AC joint will be assessed to determine the extent of his injury. Kearsney eighthman and captain Massimo Fierro (passing the ball) is an injury concern ahead of their match against Clifton College on 14 March.

Casting an eye over Northwood’s performances throughout the day, coach Grant Bashford expressed satisfaction: “For us, for the day, our under-14 A team won, our under-15 A won, our under-16 A won and our first team has drawn, so it’s a good day out, and it’s not all about the first team, it’s the system that we’re doing at home. I think a draw is the best result we’ve had here in a long time, so we’ll take it.”