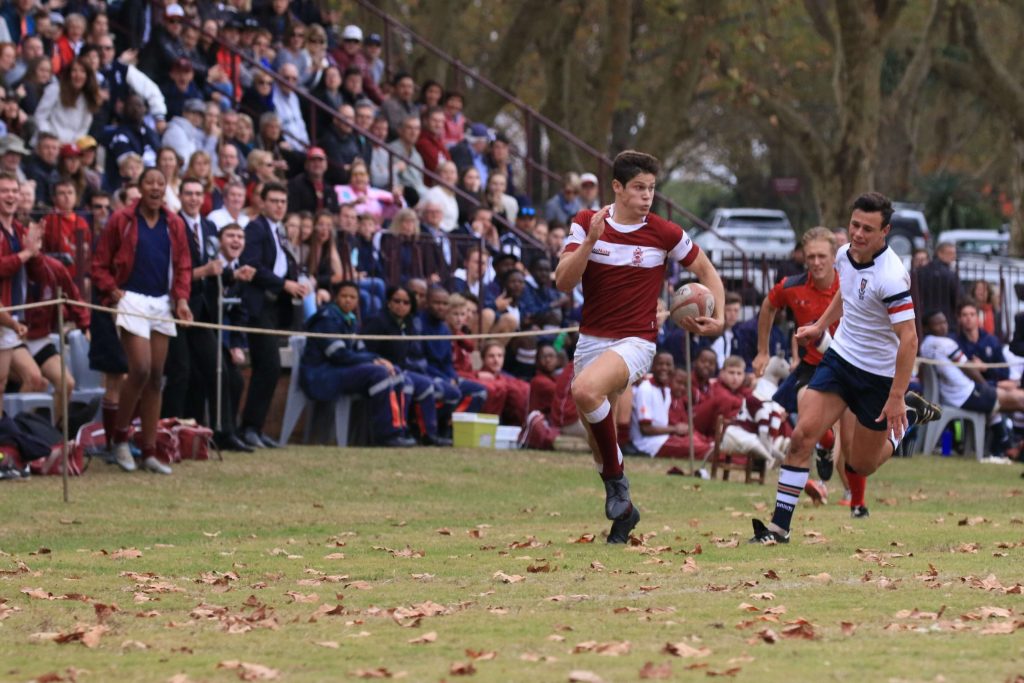 KEARSNEY College first XV and St Stithians of Johannesburg produced a match chock-full of adventurous running studded with moments of individual brilliance and well-worked tries but punctuated with an uncomfortable number of  unforced errors.

The touchdowns on The Stott were shared 5 apiece.

Next up for Kearsney is another home game – when they meet Hilton College this Saturday, 2 June 2018 on The Stott.

Kearsney lit up the scoreboard first in the St Stithians match through a penalty goal by the ever-consistent Taine Muirhead (3-0).

The 3-pointer in the 6th set the tone in the next 10 but errors coupled with wrong options kept the Saints within reach.

Kearsney pressure finally  turned into a 7-pointer…  a move that reflected much work on the training paddock saw fullback Robbie Koenig break the line before forwards/backs contributed to set up winger Gcina Gumede’s flight over the whitewash out left (10-0).

The hosts recovered fast. From the kick-off, pressure earned a penalty after a dangerous tackle on winger Gumede.

Kearsney opted for a scrum feed. A precision backline move ensued. A marked degree of player-to-player awareness and cohesion – earned through considerable effort at trainings – resulted in the selfsame Gumede touching down on the other side of the park from where Saints had transgressed.

The teams changed ends and St Stithians gave evidence that they were far from done. Somewhat against the flow, the visitors capitalised from a spilled ball, making short work of a disorganised defence (17-12).

A Saints touchdown would tip the balance in the visitors’ favour for the first time. It duly happened when Kearsney let themselves down with another soft error and the 7-pointer saw the scoreboard read Kearsney 17 St Stithians 19.

Not for long. A quickly-taken Kearsney penalty and clever punt was followed up by fullback Koenig. As the 15 readied to catch-and-dive for try-time, a Saints tackler committed too early. The consequent penalty try tilted the balance in Kearsney’s favour once again (24-19).

With the final whistle looming, further mindful attack by the Saints culminated in Kearsney losing a yellow-carded defender.

A converted try confirmed that Saints made maximum of the opportunity.

Next up: Kearsney vs Hilton College on The Stott.
Date & kick-off: Saturday, 2 June 2018 at 3pm.
* Kearsney Founders Weekend.