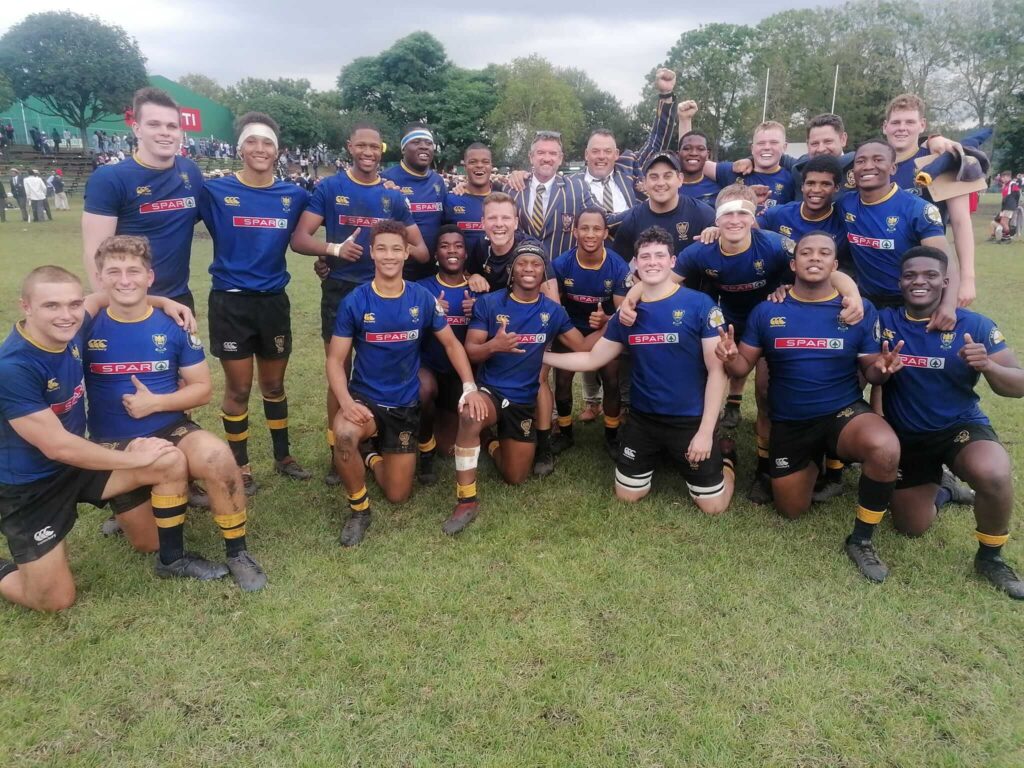 There is a full-house of Saturday afternoon 7 May 2022 first XV rugby team match-ups between the 10 schools that KZN10.com places its focus.

I will be in the Kent Pavilion enjoying the 23°C forecasted dry weather for the 3pm kick-off on Goldstones at Maritzburg College when the pride of the Red Black and White take on Northwood.

Feature photo caption: Can the DHS first XV repeat the quality of performance on Van Heerdens (where they take on Hilton Saturday) as they did here on Goldstones a few matches ago; a memorable 38-14 win over The RBW?

Both sides have had their moments this year, and their share of disappointments. So, consistency will be the primary focus along with an emphasis on playing controlled, constructive rugby in minimising the needless errors and maximising opportunities when they inevitably will present themselves.

For the 2022 Northwood first XV the unforgettable memory of the 9 March 2019 golden-Goldstones 30-26 victory over the premier Maritzburg College rugby team of that year will still be fresh in the minds of those fortunate Knights who were in grades 6, 7 and 8 those three years ago.

The 14-14 first XV draw in 2020 against College firsts at home on Reece-Edwards will also be close to the Knights’ hearts, so history and the incentive will surely be there.

For the impressively talented 2022 Maritzburg College first XV there is no greater incentive than getting back on the winning trail as the countdown nears for Reunion Day 28 May versus Hilton College. Now just 3 weeks away, it is time overdue to become more “Team” rather than just the mixed sum of their parts.

The most widely regarded match of the day would have to be that at Van Heerdens in Durban where the Old Gold and Navy Blue of the DHS first XV tackle the White with Black Trimmings of Hilton College.

The Durban High School first XV clash with Hilton College on Van Heerdens has the ideal kick-off conditions of 24°C on their splendid turf in what, as said in the previous par, is shaping up to be the marquee KZN10.com Match of the Day.

Not since 2018 have DHS parents and supporters been allowed to watch rugby as a combined force while sitting around Van Heerdens at School! And to this end video messages from esteemed members of the DHS rugby brethren have been flighted, urging the School family to come together as one for this momentous occasion against a fabulous Hilton College celebrating its 150th year.

DHS have played some champagne rugby this season and the consistent Hilton first XV are surely going to test their mettle to the fullest extent. Indeed, the side that is better able to cope with the inevitable match challenges may well come away with the spoils of victory.

Sufficient spirit and resilience is at a premium. It should be an absolute cracker of a contest.

The scene at Bowdens will also reflect the balmiest of dry, solid underfoot conditions and perfect rugby temperature to deliver a classic contest between the pride of the Gryphons and the Green Machine of Glenwood.

Expect an extremely physical contest – that is a given.

And on the picturesque Meadows of Michaelhouse one can expect hordes of House and Kearsney supporters cheering on the respective schools’ flagship rugby teams. It would take a brave man to predict the outcome, but I suspect it will be House by a whisker. But, hey, I freely admit that sometimes I am wrong, wrong and wrong.

The final of the KZN10.com school first XV matches takes place in Durban where Clifton College host long-time friends and rivals St Charles College. And once again I could suggest a winner but, hey, I did that in the paragraph above and that is enough sticking my neck out today.

Needless to say, the 5 first team hockey matches between the KZN10 schools in the late morning Saturday are also sure to provide much in the way of fierce competition and close contests. I will be firmly in place around Papes Astro at Maritzburg College come the 10.20am push-back when the Red Army take on coach Justin Collins’ Knights of Northwood.