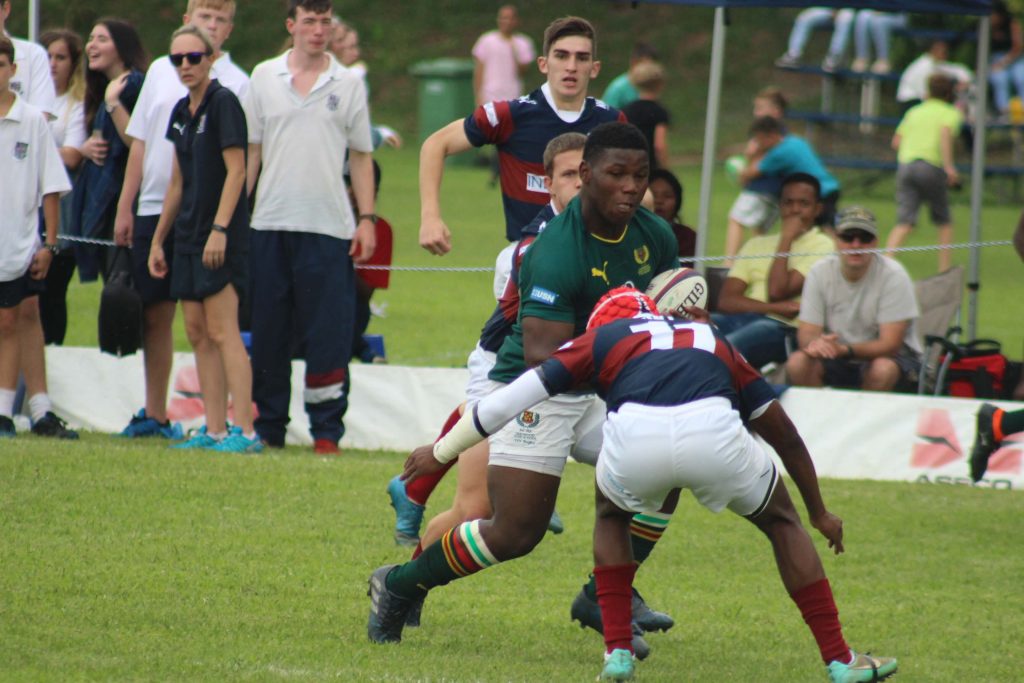 The Glenwood first XV are on a roll. I asked Glenwood head coach Derek Heiberg what makes the school’s flagship team tick.

“We did not commit to any outcomes-based goals, but rather set ourselves 10 team performance goals, as well as as individual goals that we try and achieve each match. We believe that working towards these goals, in addition to constantly reinforcing our team ethos and culture, will lead to us being successful. For us, success is not just defined by how many games we win.” So as far as player-specific aims and challenges are concerned, I asked Derek by what criteria is each player measured.

“We have a system through Mark Steele that enables us to measure each boy’s high intensity intervals, specific to his position, as well as the distance covered in training and on match days. From a technical perspective we have a technical system that measures the boys’ work off the ball – and that gives us his performance rating.”

A first XV head coach has many responsibilities – they cannot be adequately covered by one man whose primary function is to coach: “My assistant coach Jose Dos Santos has been a huge help from a coaching perspective while our manager Jason Job has taken on a huge amount of the administration work.” At the time of writing (15 May 2018) it’s certainly been a busy season – 11 matches in 6 weeks – for the Glenwood first XV. As head coach, one of Derek’s primary responsibilities, one surmises, is to manage the players: You need to be in a good space both mentally and physically to successfully negotiate the inevitable uncertainties and curve balls that each match presents (isn’t it precisely ‘that‘ uncertainty which compels us to love this game!).

If individual players, the team as a collective, lose their spark – their rugby hunger – due to fatigue, the match outcome is unlikely to be favourable.

Derek: “Yes, it has been a very busy season so far, so the key for us has been to ensure that on match day, all the boys are ready from a physical and mental perspective. We have utilised many different recovery strategies as well as performance trackers to monitor the players’ workloads during the week, as well as on match days.

“It has been important, however, to also be able to ensure that they remain fresh mentally, so team building has been a major focus for us. We place a huge emphasis on our team culture, and have initiated many fun activities that lighten the mood throughout the week – and keep a fun aspect to training.”

For every successful sports team, a strong, well-balanced squad is non-negotiable; injuries and illness are a given during winter. At a moment’s notice, each and every squad player must be ready to go into high gear when called upon.

Derek: “As you correctly said, having depth in your squad is vital to a team’s overall success. Injuries are not only part of the game but being able to rotate your players on tours is vital to ensure that they are able to perform at their best – while not overloading them. From this perspective, having the performance tracking system is a huge benefit for us as it enables us to taper a player’s training load and manage him effectively.”

The Glenwood first XV have caught the eye of many a knowledgeable schoolboy rugby fan for their brand of entertaining, effective rugby, which includes earning the floating trophy for having played the most attractive rugby at the prestigious Standard Bank Kearsney Easter Rugby Festival. Playmaker: Glenwood scrumhalf and 2017 SA Schools cap Jaden Hendrikse has been in outstanding form this season.

Facilitating attractive, entertaining and effective rugby is probably the ultimate dream for a rugby coach, yet (as mentioned above) there are times when these lofty ideals are properly put to the test – those cold (yes, even in Durban!) windy, rainy days, tired teenage rugby players… and there are still plenty more hard yards to be put in at that particular practice…  And through all this, the coach still has to keep the boys fully engaged, focused.

How does Derek and his coaching/management team keep things together? “While this team is incredibly skilled, the most pleasing aspect has been how they adapted to the team culture that we have put in place,” says their coach.

“We have not had any issues as far as keeping them engaged is concerned, as they have fully bought into our team- as well as individual-performance targets, so they are constantly trying to improve. That has been the most encouraging aspect for us. We do have an attacking system that we work into wherein the players are free to make their own decisions. For us, it has been about trying to make the correct decisions at the correct time, while playing at an intensity that we are happy with as a team.”

It also appears at times that these talented players, as individuals and as a team, struggle to successfully counteract the rapid changes that can unfold in the face of the opposition changing a tactical gear or mixing it up. It goes without saying, then, that this inability to find an effective counter-measure can spell doom for a quality but tactically naive team’s chances of emerging victorious.

So how do Derek and Jose get the balance right? There is the starting point – the Glenwood pre-match game plan. Then there is the challenge of educating the boys to read a match as it plays out in front of them, the confidence to come up with a solution as fast as possible so as to ensure a successful outcome?

“The key for us is to try encourage the boys to make their own decisions within an overall team system. The important aspect for us as management has been to get the players to buy into the system we run – and have input into it.

“The coaching philosophy that we have adopted has been collaborative from that perspective – but we are incredibly strict in terms of maintaining our team performance standards and team ethos. To their credit, the boys have responded incredibly well.”

‘We always want to play at a high intensity, so there is a huge focus on our conditioning’

Of course, no matter how thoroughly a coach prepares his boys pre- and during- season, he can’t actually don the first XV match jersey on game day and get into the thick of the action. Bearing this in mind, how important is the player-leadership group to Glenwood’s success?

“The important aspect in this regard has been to encourage the players to take responsibility from a leadership perspective, both on and off the field. With that in mind we have developed a strong leadership group, consisting of senior and junior players, who are an extension of our management throughout the week and on game day.”

The next question I put to Derek was obvious: So who are these players … and what qualities does each bring to the team cause?

One common trait that troubles virtually every schoolboy side is the difficulty in maximising the benefits of territory and possession, and turning those advantages into points. A mix of great linebreaks; solid platforms established at the set-pieces; quick, quality ball at the breakdown; a varied group of gamebreakers (i.e an 8, 9, 10 or 12 for example) present a score of opportunities to add value on the scoreboard – yet all-too-often they are not capitalised on.

Derek, in my observation at one game, your team versus Maritzburg College on Goldstones, it appeared to me that Glenwood got it right. Are these facets among your focus points at training?

“So for us, we have tried to narrow the gap – and as a result we have looked at training methods to ensure that we train at the required intensity to put the players in situations where their skills are under pressure … and then look at how they adapt to the situation and what are the decisions they make. This has aided us in converting more of the chances we create in a game.”

Thanks Derek, you’ve summed it up nicely.

KZN10.com extends its best wishes for the rest of the season.

21 July vs HTS Middelburg (away)