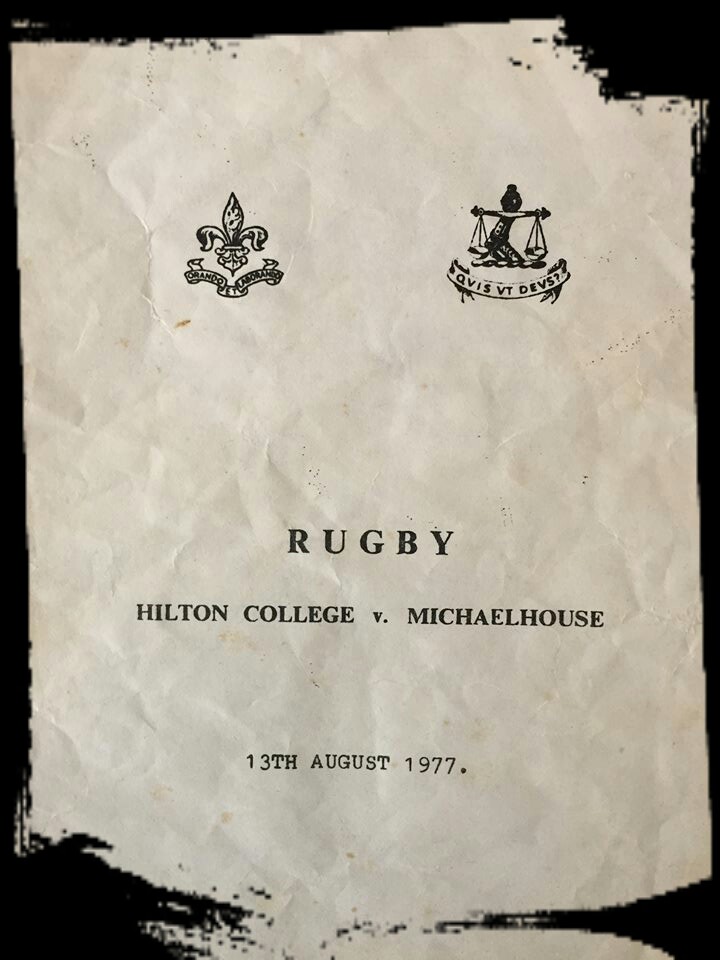 Hilton first XV lock 1977 vintage Clive Scotney digs deep…just 8 points separated the sides over 2 matches… Michaelhouse must have been favourites (as Hilton 2018 will be on 16 June) if one reads further.

I remain constantly amazed at the sharp recollection KZN10 Old Boys have of matches from yesteryear. Over to Clive…

“Hi Jono, you’re asking me to dig deep into the grey matter to retrieve some memories of the Hilton/Michaelhouse first team matches of 1977, 41 long years ago now. 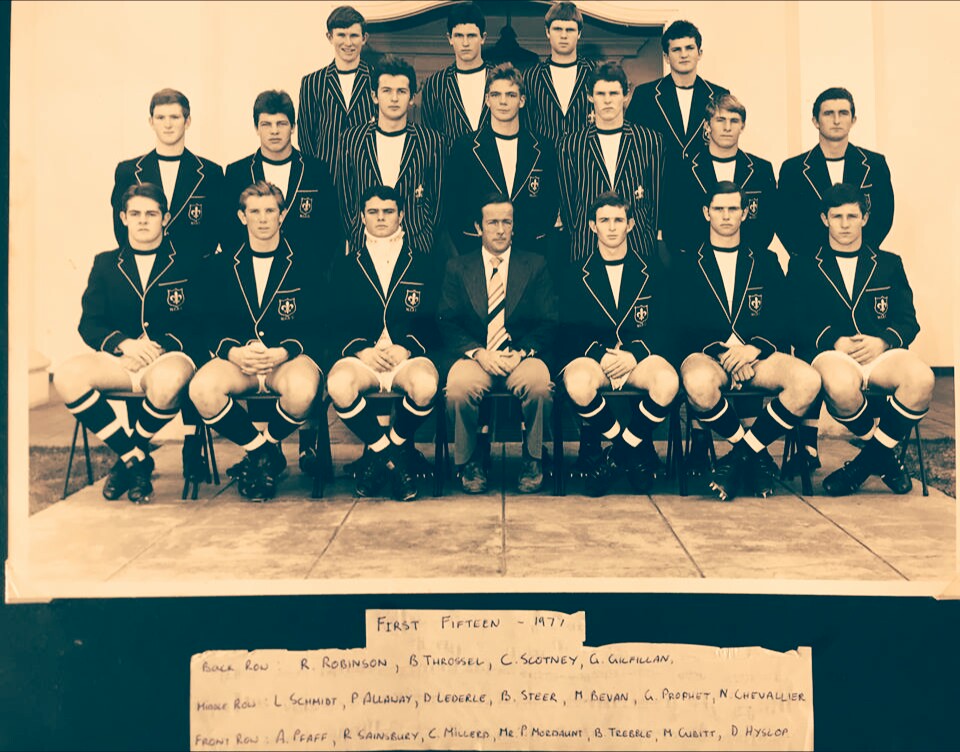 The 1977 Hilton College first XV with coach Mr Peter ‘Molly’ Mordaunt. If you enlarge the image, names can be matched to faces.

“The first match in 1977 was away at Michaelhouse, Meadows field a perfect picture of a mid-winter sunny day in the KZN midlands, the trees mostly bare save for a few yellow and orange leaves and grass singed brown by frost.

“We were well aware of the tradition of the great rivalry of the day, and the high level of sportsmanship that was expected of us by our coach, Molly Mordaunt, and uncompromising headmaster Raymond Slater. Any shows of unsportsmanlike behaviour by any Hilton boy in any team over a weekend was severely dealt with on the following Monday morning by the latter, high tackles, questioning the ref and socks down among the punishable crimes.

“At U14A and U15A level we had always been beaten by Michaelhouse, a 26-0 drubbing at one of the U14 games still indelibly stamped in my mind to this day.”

Dear reader, according to Mr Google (who is infallible of course) – I did a check – 3 points became 4 points for tries in 1973. I suspected, to no avail, that House might have won by more in today’s points. Not so. 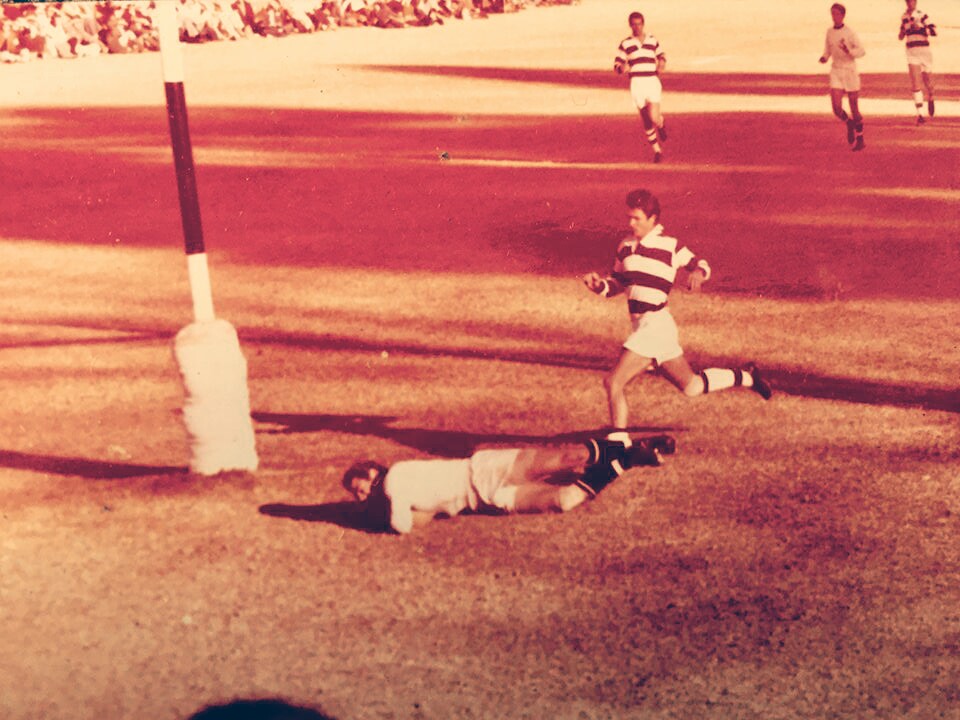 I digress. Back to Clive we go:

“To be brutally honest, our 1977 team was probably not amongst the strongest of Hilton 1st XVs, but we felt we had a fair chance of winning, especially with our 2 Natal Schools reps, Carey Millerd and strong winger Andrew Pfaff in great form.

“We had a mobile pack, locks Murray Cubitt and Bryan Steer, and eighthman Dave Lederle owning some of the fastest 100m times in the school. Michaelhouse were strong across the field… from speedy wings Ali Pein and Mark Tingle, a rock-solid fullback in Ian Lambie, with Henry Mansell controlling things from flyhalf. Their forward pack was ably led by versatile eighthman Dale Townsend, who in earlier years had punished us from scrumhalf and centre.

KZN10.com goes off on a tangent again: Dale was the Michaelhouse first XI cricket captain I think? House’s Henry Mansell was also an outstanding schoolboy wicketkeeper (?)/batsman if I am not mistaken. Ian Lambie a top batter as well? Patchitt a noted bowler?

Back to Clive: “The day went fast. On the bus up to Balgowan I remember listening to Uriah Heep’s Return to Fantasy on my portable tape recorder with its single earphone, till the batteries went flat and the nerves kicked in as we approached the school.

“After warming up, as we picked our way through the picnic blankets at the top of the embankment before running out, the adrenaline surges, the smell of wintergreen oil and Tiger balm in the nostrils mingled with the fancy perfumes of the ladies – You know it’s Hilton -MHS time!”

“That Game 1 was over in a flash, as it is in high-intensity games. The scoreboard will tell Michaelhouse won a fairly even match 14-8. The return fixture at Hilton in the 3rd term was also a close match, with Michaelhouse running out eventual winners 14-12. 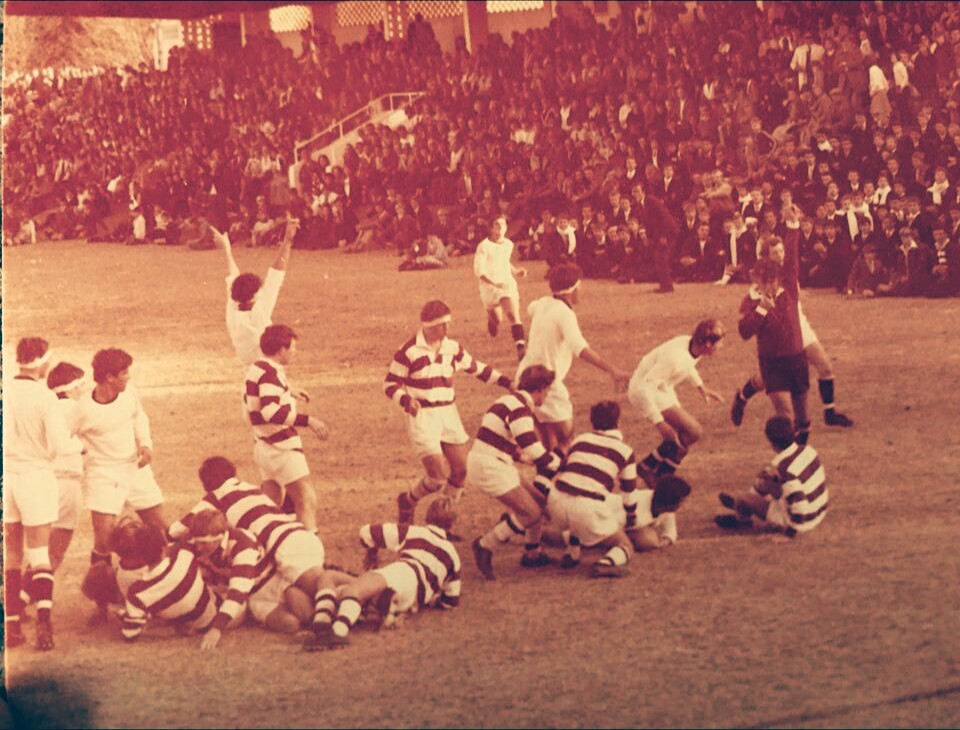 “Many will remember the Gilfillan Field 14-12 game for a questionable tackle on Carey Millerd late in the game, which in Hilton eyes anyway, robbed us of a try and victory! Such are the controversies that keep this rivalry alive and kicking. The official all-time win/loss *leger between the schools at this point in time was in favour of Michaelhouse.

“I have e-mailed school historian Bev Davidge to see if he can get the official leger at this time. My recollection is that House are still in front by a few; would be interesting to add to your article.”

Thanks Clive, like the guys who have brought their memories to KZN10.com recently, once again I felt like I was actually there, at the matches (although in reality probably Goldstones on the day). Some of the U15A, 2nd XV and 1st XV names in the match-day programme published herein certainly bring back memories for this-then 1977 Maritzburg College 2nd former. The pictures you unearthed from an old family album will no doubt also bring back fond memories of that time for many readers. 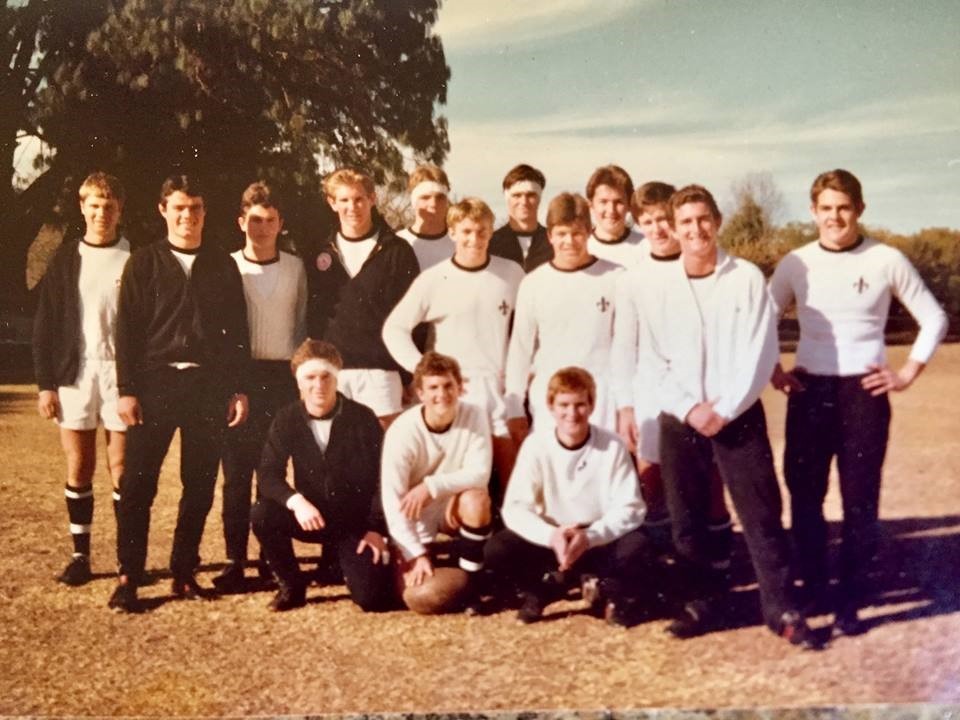 1977 Hilton College first XV readying themselves for the warm-up on Falcon Oval. 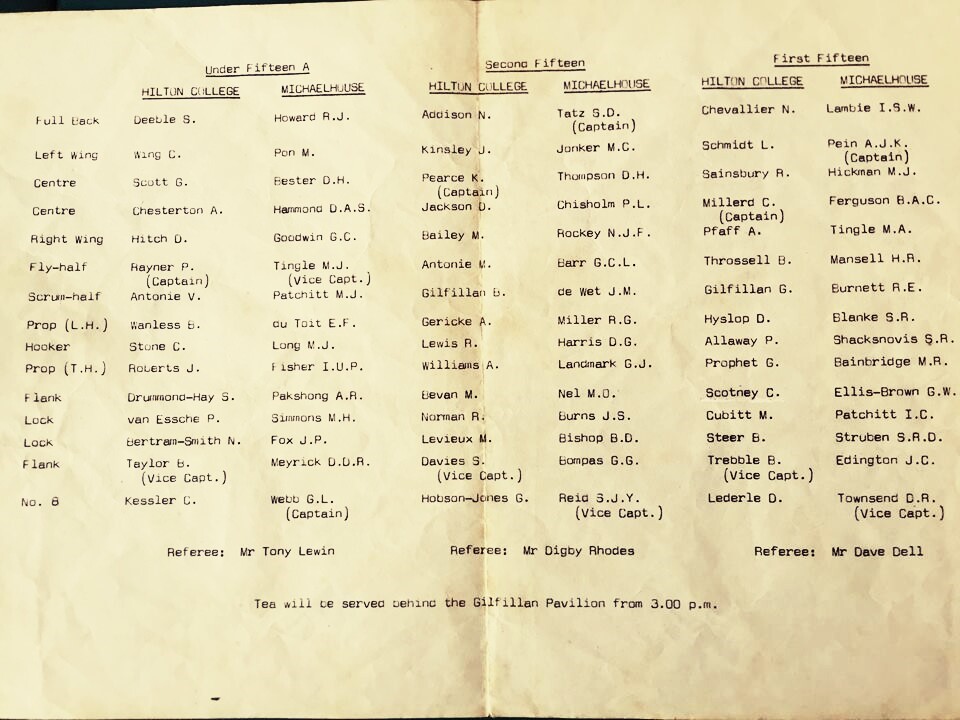 HOW THEY LINED UP: First XV plus 2nds and U15A team lists from the 13 August 1977 Hilton College vs Michaelhouse rugby programme.

* I have included the first names of the players Clive mentioned and ones I think I know. Perhaps readers can educate KZN10.com  further?

* The 2nd XV and U15A Hilton/House team line-ups will also jog memories… Paul Rayner (a schoolboy cricket legend, no explanation needed), U15A House scrumhalf Mike Patchitt (younger brother of House 1977 lock Ian) was the 1979 Natal Schools opening bowler (and first XI captain?), then there’s Deeble, Wanless; Mark Tingle at left wing in the 77 House first XV – elder brother of the late Mickey Tingle; Mickey in the above programme as House’s 10 in the U15A match, with Paul Rayner his opposite number.

* Mickey made a big impression on me … (Michaelhouse & Natal Schools’ flyhalf 1979… & again in 1980 when at Maritzburg College… Mickey, in the 1980 MC 2nd XI, hit sixes way over the trees on Basher Ridge)… I heard that in 1979 Mickey – playing for Michaelhouse first XI on that occasion – hit a 96 in no time at KES, whose much-vaunted Transval Schools opening bowler was caned to all corners of the cricket oval by the power in the Tingle bat.

* Clive Scotney, his late brother Duncan, myself and brothers Gra’ and Mike spent many a happy Sunday morning alongside grass hockey pitches in Maritzburg of the 70’s playing our own version of the on-field action provided by our dads, Derek and Roy.

* Clive says Rugby was introduced at Michaelhouse in 1896 when the Rector, Canon Todd, ruled, that ‘brain power had to be exercised, and that by setting the blood freely in motion, rugby especially, was beneficial to the brain.’

* At Hilton, rugby had been introduced a few years earlier, being a slightly older school.

* The first Hilton v Michaelhouse match was played in 1904 and the friendly rivalry, not always friendly on the field, has persisted to this day.

KZN10.com says, “Long may it continue – it is a highlight of the KZN10 calendar.”

* A leger is a record of account aka a ledger.